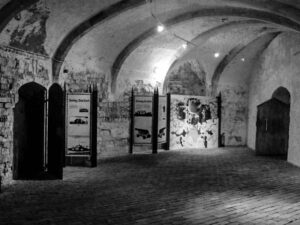 Experience a night of ghost hunting at Deal Castle in Deal, Kent with Ghost Hunt Events on 16th September 2022, 7:00pm until 1:00am. Tickets £40 per person

History of Deal Castle
Deal Castle is an artillery fort constructed by Henry VIII in Deal, Kent, between 1539 and 1540. It protected against invasion from France. The Castle comprises of a keep with six inner and outer bastions, the moated stone castle and had sixty-six firing positions for artillery.

During the Second English Civil War of 1648–49, Deal was seized by pro-Royalist insurgents and was only retaken by Parliamentary forces after several months' of fighting.

Although it remained armed, Deal Castle was adapted by Sir John Norris and Lord Carrington during the 18th and 19th centuries to form a more suitable private house for the castle's captain, which was an honorary position.

In 1904, the War Office concluded that the castle no longer had any value either as a defensive site or as a barracks and it was opened to the public when the captain was not in residence. Early in the Second World War, the captain's quarters were destroyed by German bombing and the castle became a Battery Operating Post (one of the first-floor rooms in the keep became the Battery Office) for an artillery battery placed along the shore line. The castle was not brought back into use as a residence and was restored by the government during the 1950s to form a tourist attraction.

One not to be missed!

Our team of experienced investigators will be on hand throughout the night so that you can participate in:-
- Séances
- Vigils (in the dark)
- EVP (Ghost Voice) Experiments
- Ouija boards / Glass Divination
- Automatic writing, Dowsing and Pendulums
- Table tilting & rapping
- Use of our ghost hunting equipment
and much more with our experienced Mediums & Paranormal Investigators.

Event will include:-
- Usual group size 8 people (but may be a maximum of 12 on rare occasions)
- Regular breaks
- No lengthy briefings or workshops
- Controlled sessions & 45mins - 1 hour with our Mediums
- Use of our ghost hunting equipment
- The number of groups depends on venue size.
- Free time for you to investigate / explore on your own
- Opportunity for lone vigils throughout the evening
- Complimentary tea and coffee available in the breaks

We can't guarantee spiritual or ghostly activity but we can guarantee that everything you experience will be 100% real.


What Happens at the Event
Indoor Events
Our events are always 100% investigation and vigil events, we won't waste time by taking you on a history tour of the venue.

We will not usually talk about the history of the building unless people ask us to do so.
We don't hold workshops or briefing on equipment usage. Any equipment that you will be using throughout the event will be explained at the start of each session by our team leaders.

For the first few hours (usually 1 hour per session) you will be in a group and you will spend time with our Mediums doing séances, where they will try to get the active spirit to move you in some way (this is not designed to scare you) and with our paranormal investigators doing experiments, table tilting, glass divination, Ouija boards, EVP (Electronic Voice Phenomena a.k.a. ghost voice) experiments and other equipment experiments using the latest ghost hunting equipment.