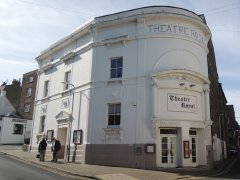 From 1885 to 1899 actor-manager Sarah Thorne ran a school for acting at the Theatre Royal which is widely regarded as Britain's first formal drama school. Actors who received their initial theatrical training there include Harley Granville-Barker, Evelyn Millard, Louis Calvert, George Thorne, Janet Achurch, Adelaide Neilson and Irene and Violet Vanbrugh, among others.

According to local reports, hauntings began in 1918 when the ghost of Sarah Thorne (an actress) was seen. There is one particular area where paranormal activity is higher; a trapdoor which leads to what was a smugglers cave. Paranormal activity has been reported on the stage and backstage and it is known that one of the boxes is haunted as a man jumped from the box to his death during a performance.

Another ghost, that of an actor who committed suicide, is held responsible for creating strange lights that float around the stage area.