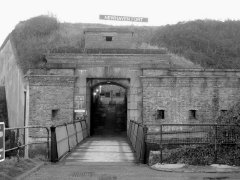 Newhaven Fort is a Palmerston fort built in the 19th century to defend the harbour at Newhaven, on the south coast of England. It was the largest defence work ever built in Sussex

Building work commenced in 1864, with a workforce of 250 men and three steam engines. Work was completed in the summer of 1871 and the guns were emplaced in 1873.

The fort was originally armed on the eastern side in the 1870s with two 9-inch rifled muzzle-loading guns on Moncrieff disappearing carriages, the only such arrangement in the UK. From about 1906 the armament consisted of two modern 6-inch Mark VII breechloading naval guns, and two modern light QF 12-pounder guns for defence against torpedo boats.

The main 6-inch Mark VII guns were replaced in 1941 by a battery of BL 6-inch Mk 24 coastal guns (a modern coast defence version of the Mark VII built during World War II), which were located west of the fort.

The army vacated the fort in 1962. Restoration began in 1982 following a failed commercial redevelopment venture, and 6-inch Mk VII guns have been re-installed in the fort to approximate the 1906 - 1941 armament.

There are numerous reports from visitors to the Fort, when walking into the main tunnels, or the caponier, of being pushed and seeing dark figures slipping into the shadows. Other reports include sounds and smells, people have reported the noises of chains clinking. Some believe it is the ghost of a woman called Martha who committed suicide at the fort. Other occurrences happen in the magazines and laboratory.

The forts numerous exhibitions are also a hot bed of activity. People have reported hearing the sounds of soldiers boots, footsteps and shuffling, moans of suffering have also been heard and reported on numerous occasions.